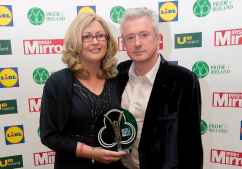 A doctor delivered the devastating news that all three of her precious boys, Archie, now 9, and twin boys Issac and George, now 4, had a muscle weakening genetic disease called Duchene Muscular Dystrophy (DMD) that would rob them of their childhoods and eventually, their lives. Paula, 47, said: “It was catastrophic. We were told to go home and ‘love our children’. That’s not very inspiring.”

Out of the seeming hopelessness, Paula has somehow found superhuman inner strength and positivity that has seen her fighting for her boys and other children stricken with DMD. In the space of a year, her charity ‘Join Our Boys’ has raised a staggering €700,000 and she’s organised to bring expert medical minds from across the globe together for the first time later this year at Dublin’s Croke Park to discuss DMD. She’s also hoping to raise €6 million or a human drugs trial for a cure.

One of the charity’s volunteers Annita Hughes, who nominated Paula, describes her determination to find treatment or a cure as “awe-inspiring. “She’s incredible and inspirational. Paula is just the most courageous person. Her biggest goal is to create awareness in the UK and Ireland,” she said. Paula added: “From the catastrophe in our family, we want things to be different to benefit other families.”

“Paula’s strength and determination to try and nd a treatment or cure for her boys and other children like them is incredibly admirable. She’s managed to nd this superhuman, inner strength and instead of curling up in a ball, she’s raised a staggering amount of money as well as awareness about DMD. She is the Pride of Ireland.”