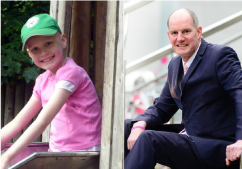 As Jimmy Norman sat at the bedside of his precious daughter Aoibheann, 7, his thoughts selflessly turned to other families and children that were also enduring the nightmare of living with childhood cancer.

Despite facing the horrific reality of losing his little girl, the seeds of a charity in her memory were planted. The
engineer was inspired by his brave little girl who bought adress for a hospital pal out of her own money, and despite the agony of losing his daughter on April 7, 2010, Jimmy poured his heart and soul into continuing the
kind-hearted deeds his little girl had started.

From fundraising initiatives, to helping make a house a home for a dying child, the growing army of big-hearted volunteers at the charity
‘Aoibheann’s Pink Tie’ (APT) make a tangible difference to the lives of others. Jimmy said: “We went from nothing to raising over €460,000 last year. I have one proud boast – every single family that has approached Aoibheann’s Pink Tie for help, have been helped.”

It’s estimated more than 300 families have been helped so far. APT’s latest initiative is the ‘Chemo Duck’, which has a special tube coming out of it’s chest just like many sick children, which the charity gives free of charge to youngsters with cancer throughout Ireland. ATP also runs Picnominate project in which children can nominate a fellow cancer sufferer to have their bedroom decorated with their favourite characters or designs.

Majella Walsh, whose son Jack, 13, has often been helped by Jimmy, said: “He’s known in our house as the man with the golden heart.”

“The way Jimmy has poured his heart and soul into helping others in the face of his own devastation makes him so worthy of this award. He turned his heart break into a positive.”