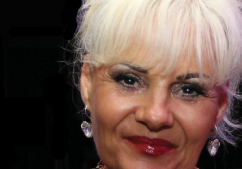 Oscar Wilde said Ireland would be more civilised if people learned to listen. And 100 years later Fiona Doyle turned his hope into action and bravely forced Ireland to listen to the horrors she suffered as a child, the same horrors thousands of others faced over generations.

Her quest was to punish and prevent; punish her paedophile abuser and prevent others from suffering as she had. Fiona revealed the childhood rape that was part of her everyday life and finally jailed her own father, Patrick O’Brien, who had used and abused her for years.

After decades of fear- fuelled cover-up, Fiona took the biggest risk of her life four years ago and revealed the sexual, physical and emotional abuse that le her at times unable to function as an adult. She took a case against her father in 2010 and he eventually pleaded guilty.

Fiona’s decision to speak out forced Ireland to listen as she exposed the country’s silence and secret shame about abuse. Fiona said: “A er all the pain, shame and fear,after the humiliation and shunning, just hearing that people care enough to nominate me for any sort of award like this has made me smile again.”