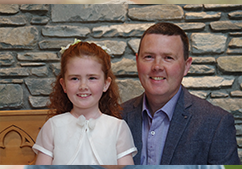 When Declan went into Killarney on his day off he had no idea his life-saving nursing skills would be put to the toughest of tests.
For Athenry visitors Claire and Gabriel Divilly, the date May 8, 2013 will be forever ingrained in their memories. A day of sightseeing and shopping was brought to an abrupt end when Gabriel complained of dizziness before dropping in the street.

“I screamed with fright. I knew in a matter of moments he was gone because he stopped breathing altogether and started turning blue,” Claire said. Thankfully, Declan’s wife Tina witnessed the heart attack horror unfold and rang him for help.

Declan explained: “I came running up the street and I could see the man was turning blue. He had been down about six minutes at that stage and there was no pulse.”
Keeping a calm head, Declan immediately started CPR on 58-year-old Gabriel. A girl from the cafe across the street went and got a nearby difibulator and Declan shocked Gabriel twice, bringing him back to cling onto life.“I found a weak pulse and kept giving CPR until the ambulance arrived. The sweat was dripping off me, but we were always told the best thing was to keep going if we thought there was any chance at all,” he said.

For 40 excruciating minutes Declan kept giving CPR to Gabriel in his desperate fight to keep him alive.

Claire praised: “Gabriel and I and our family will be forever indebted to him. I could have been a widow without Declan bringing my husband back. He was sent by an angel.”
Judges’ opinion: “An emergency services hero is someone who goes above and beyond their job and Declan certainly did that. When off-duty he didn’t give-up on saving Gabriel Divilly’s life.
“He gave CPR for 40 minutes and the fact this was the first time Declan had to use his skills outside a hospital environment make his life-saving actions all the more remarkable.”