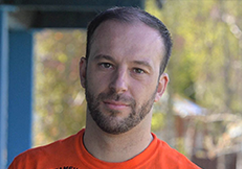 It was an unimaginable tragedy that shook Ireland. Families forever changed; forever heartbroken by the drowning of their five loved ones at Buncrana slipway on March 20.

The only glimmer of hope in the darkness that engulfed those left grief-stricken by their devastating loss was that, then four-month-old, Rioghnach-Ann had been saved thanks to the heroic actions of Davitt Walsh.

There was no-one more grateful than Rioghnach-Ann’s heartbroken mother Louise James who lost her partner Sean McGrotty, sons, Evan and Mark, her mother Ruth Daniels and her sister Jodie-Lee Daniels.
Praising Davitt, Louise said: “Without fear for his own life and safety, he entered Lough Swilly to save my Rioghnach-Ann, and I will be forever grateful to you. Thank you so, so much.”

In the immediate aftermath of the tragedy other distraught family members also thanked Davitt for putting his life on the line to save the baby girl.
Frank McGrotty, a brother of Sean’s, said: “I want to thank the man who saved her. I don’t know your name sir, but you are a hero in this family’s eyes.”

However, modest Davitt has struggled to come to terms with being hailed a hero and instead, was left guilt-ridden at not being able to do more to help.
“I was in bits about it,” Davitt said. “I didn’t really take it on that I had saved the baby. I just looked at the negative – I’d left the family out there – and I couldn’t help them.
“In all honesty I don’t feel like a hero at all. I only wished at the time I could have done more,” he said.

Judges’ opinion: “Davitt didn’t think twice about risking his own life when he waded into Lough Swilly. His heroic actions in saving little Rioghnach-Ann has offered a vital glimmer of light in the darkest of times.“His modest heroism has rightly been the source of admiration throughout Ireland and further afield. He is the Pride of Ireland.”