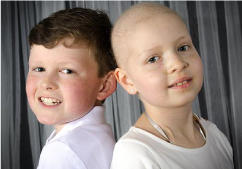 Luighseach O’Donavan from Corofin, Co. Clare knew her little girl Shona was seriously ill when black and blue bruises appeared all over her body.

The O’Donavan’s were then told by consultants that little Shona, 9, had Aplastic Anaemia Acute Bone Marrow Failure, which is extremely rare, and she urgently needed a bone marrow transplant.
Twin brother, Caoimhin, came to his sister’s rescue and with no thought to the impact it would have on him, he offered himself up as a hopeful match.

Doctors had to get the bone marrow from the little boy’s body by inserting a needle into his spine. They had to repeat the painful procedure numerous times to ensure they got enough And that afternoon, his twin sister Shona underwent her transplant thanks to her precious twin who proved to be the perfect match.

Little Shona’s blood counts were dropping rapidly following her diagnosis so it was really important to get a donor quickly. If it wasn’t for Caoimhin, his twin could have died. Joy Long, 58, the twins’ grandmother from Ballybofey, Co. Donegal, nominated her grandson for his heroic actions. She said: “He was so brave to put himself forward. After he was stabbed fifty times, he was in bits and dizzy but never complained once.”

“For a little boy to offer himself up straight away to undergo major surgery with only the thought of his sister’s survival and recovery, is mind blowing. Imagine the pain he we went through and at no point did he think of himself. It’s heart-warming to know little boys with such courage exist in the world.”