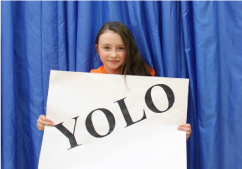 When six-year-old Alex Featherston learned that her father Andy Morgan hadn’t died from a heart attack but by suicide, she turned to her mother Joanne and said: “Nothing will bring us down.”

And it’s been that incredible positivity and natural empathy towards others that has seen her share her heartbreak of losing her Dad, 39, with the world. At the tender age of 10, Alex came up with the idea to make a video telling of how she “misses her dad but it’s OK,” to help other grief stricken families tell the truth to the children who have lost a loved one through suicide.

The courageous child made the deeply moving video not knowing that it would go viral and touch thousands of hearts. The Dublin girl, now aged 11, explained: “I wanted to do a video to help inspire other people. I love making people feel happy. “It was a bit hard answering the questions and a bit emotional.” Angie McEvoy, Secretary of The Andy Morgan Foundation, filmed the little girl in the video which has now received thousands of hits.

She said: “She’s a little angel. I think she’s just so brave, so courageous and she doesn’t realise what she’s done for people. “She’s done so much for people who are in a dark place and has broken the stigma. I can’t place into words what I think of her.” Alex’s proud Mum Joanne now takes her daughter’s video into schools to help other bereaved families and children cope with the loss of a loved one.

“It’s incredible at such a young age that Alex chose to share her message and help others despite the utter devastation of losing her dad. We love this story of hope and reaching out to others, this courageous young girl should be awarded for breaking the stigma for families to be more open about suicide.”