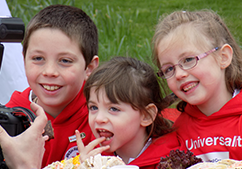 Seeing your newborn baby sister lying limp and turning blue would be enough to terrify anyone.
But for siblings Harry and Molly Flynn, they don’t flinch when their baby sister Isabelle stops breathing and lapses into unconsciousness. Instead they keep calm and start resuscitating her using the CPR technique they learnt at the Irish Red Cross.

Their lightening quick actions have saved their little sister’s life dozens of times says their proud mum Maria.
Little Isabelle, 5, was born prematurely at 28 weeks weighing just 2lbs. Her early arrival has left her with Cerebral Palsy and Apnoea which means she can suddenly stop breathing at any stage during the day or night.
Mum Maria, 40, said: “Harry and Molly have saved Isabelle’s life easily 100 times when she has stopped breathing.

“They have literally brought her back from the dead. The first time it happened Isabelle was eight weeks old and Harry was holding her in his arms in the sitting room. Then all I heard was, ‘Isabelle breathe, breathe’. I ran in and he had put her down and was blowing in her mouth. “She was unconscious, limp and her pulse had gone; and he brought her back. Harry was only six when that happened.” She added: “He was as cool as a breeze.” Molly has also given Isabelle CPR on a bouncy castle and while out grocery shopping in a supermarket trolley.

“I’m a single mum so it is difficult to always have an eye on Isabelle, knowing that I can always rely on Harry and Molly is literally a lifesaver. They are absolutely amazing.”

Judges’ opinion: “These kids stood out from the rest of the nominees as they have helped save their little sister Isabelle’s life countless times. They show so much courage by keeping cool heads in terrifying situations that would frighten most adults.”