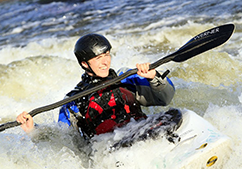 It was just another day in his outdoor office as Alan Herdman taught a group of youngsters how to paddle board.

The sun was defying the usual Irish summer weather near Barna, Co. Galway and a group of children were taking advantage of it by swimming in the picturesque Rusheen Bay waters.
But the picture postcard summer setting was soon to be shattered in a matter of moments when a dog walker frantically shouted for ‘help’ from the shore.
“I went around the corner I was greeted by the sight of eight children all at different stages of drowning,” said Alan.

Although Alan, 24, had often practiced emergency scenarios during his training as a kayak instructor, he had never been prepared for so many casualties being in the water at the same time.
“My first thought was that not all of these eight children are going to live today, this will be about minimising casualties,” he said.

“I gauged at what stage of drowning the kids were at and then paddled to those who needed me most. I grabbed a girl who was furthest away from me first.”

The NUI Galway student then plucked another child who was struggling nearby to the safety of his board. He then jumped off his board to swim and save the others.
As Alan struggled to keep his mouth above water under the weight of three children clinging to him and two on his paddle board, the hero’s colleague entered the water to rescue the three remaining youngsters after hearing Alan’s whistle call for help.

The hero believes the chances of all the children surviving would have been “one in a million” had he of done anything different on that fateful day last July.

Judges’ opinion: “The sheer scale of Alan’s rescue is truly remarkable. He bravely managed to save five children who were literally hanging off him and by whistling to his colleagues he also had a hand in helping save the other three children. Incredible!”